We left the hotel early and made our way to the station.  There are plenty of trains from Innsbruck to Salzburg but several of the locals were running late and we decided on a regional express.  This was severely delayed on the section through Germany because of extensive engineering work but with the judicious use of a recovery allowance we contrived to arrive almost on time.

Salzburg station looks as if it has been hit by a bomb.  The whole place has been torn up and there are temporary walkways all over.  It looks as if it will be great when completed but until then the station is a mess.

My first impression of modern Salzburg is that it is a mess.  The streets are crowded and many parts of the town are torn up and in a state of disarray.  We went to the Salzburg Tourist Office and bought a 24 hour pass on the transit system and used that to take the trolleybus to the Hotel Wolf.  We are very centrally located in a small hotel close to the important tourist venues.  The room is great, recently refurbished and the floor boards look to be made of solid wood about 15 inched wide.
We went back into the bomb site and tried to get a train that would take us to see the Attersee but OBB were in a state of disarray and with the connections concerned it was evident that it was going to be a difficult task.

We took a trolley bus to see the Mirabel Gardens which are pleasant but very formal.  From there we came back to Mozartsteg and walked around the area of the hotel.

Supper was outside at a beer place close to the hotel.  The tables had been set up in the street.  It would have been alright but a street cleaner machine came along and went round and round the square.  Other cities, including Ottawa, do this at night.

We had a walk around the old town afterwards.  The street signs are really interesting.  Even McDonalds has been forced by the city to provide a sign in keeping with the area. 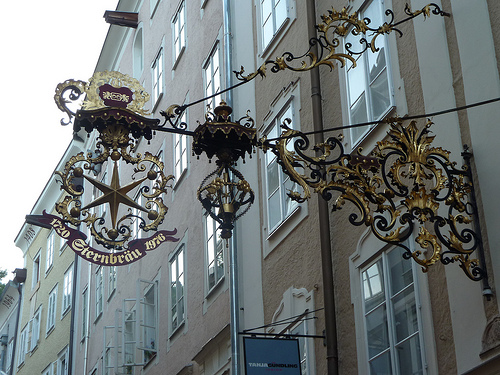 Posted by Colin Churcher at 6:43 AM