Friday 6 May - Bordeaux and trams

Typical SNCF arrogance - our train was shown on the board as going to Arcachon although the majority of passengers were going to Bordeaux.  The only way to find out is to use the train number.  It would have been helpful if the SNCF could have put Bordeaux in the departure board, there was room.  We left Paris Gare Montparnasse on the 0915 train which actually left at 0927 because they were looking for a crew.  The initial announcements were that we would make up the time lost by Bordeaux.  However, a stop at Poitiers to change crews, meant that we lost our path and finished up in Bordeaux half an hour late.  The train, which was scheduled to go on to Arcachon, was terminated at Bordeaux and intending passengers told to make their own way on.  Neither the SNCF nor DB do a reasonable job in running high speed trains in my recent experience.

It has been some time since I was over this line and the lineside growth is noticeable, particularly the gorse bushes which are a bright yellow this time of year.  Although timekeeing was abominable the seats were very good.  SNCF even managed to get the seat spacing to coincide with the windows.  This month is the thirtieth anniversary of the original TGV service between Paris, Dijon and Lyon.

The first part of the run is through chalk country - there was one bright blue field, probably flax but it could have been lavendar.  The tunnel under the Vouvray vineyards marks the end of the high speed section.  The driver tried to make up time and was running to the limit on the conventional line but to no avail.

As we came closer to Bordeaux (around Angouleme, Poitiers) I noticed something the late Doug Fullerton (former Chairman of the NCC) pointed out to me on our return to Paris from Dijon while on a government mission to look at the SNCF.  He said that the houses in the country, even the villages themselves, looked as if they had sunk into the landscape.  The  things that mark our very existence had become minimized by the landscape.  Living is just part of history - one is at ease with the environment.

The use of flint gave way to the use of brick and stone as we progressed but the vine yards did not become evident until quite close to Bordeaux.

At Bordeaux the train stopped and everyone was out on the platform within about a minute - in about the time it takes VIA to get the one door open on each car.

We knew that we could take the tram to the hotel.  The trams run right along the station forecourt.  The ticket machine was easy to use and the trams are very frequent.  We started with overhead wires but these were replaced by a ground level third rail which is only live under the tram itself.  The hotel Majestic is less than a minute from the main train interchange station at Quinconces.

Check in was quick and we went to L'Entrecote round the corner.  It is a steak and fries place similar to Le Relais de Venise but the meat was not so good and the sauce was better at Le Relais.
A visit to the Tourist Office and we have arranged a self guided tour of St. Emilion tomorrow. Next was the Jardin des Plantes and then a rest in a cafe by a tram stop where there was a changeover from overhead to third rail.  It seems very simple, I don't know if it is automatic but all I could see was the pantograph going up and down depending upon which way the tram was going.  The third rail is broken up into sections about 4 metres long with ceramic tiles in between.


Click above to see all images of Bordeaux trams.
Bordeaux at night is spectacular.  A few years ago a number of warehouses were removed from the river side area opening up the magnificent buildings behind.  There is now a broad walkway along the riverfrom which the buildings can be seen to their best.  They are lit up which makes an amazing spectacle. 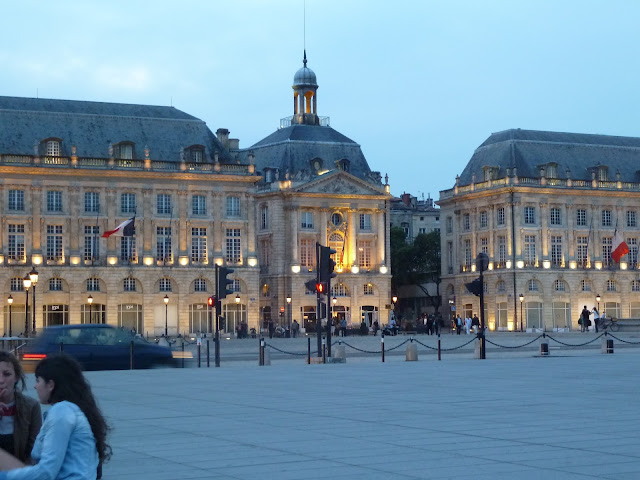 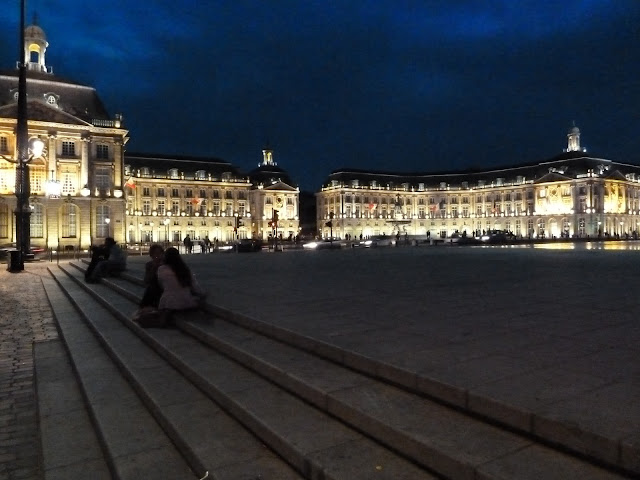 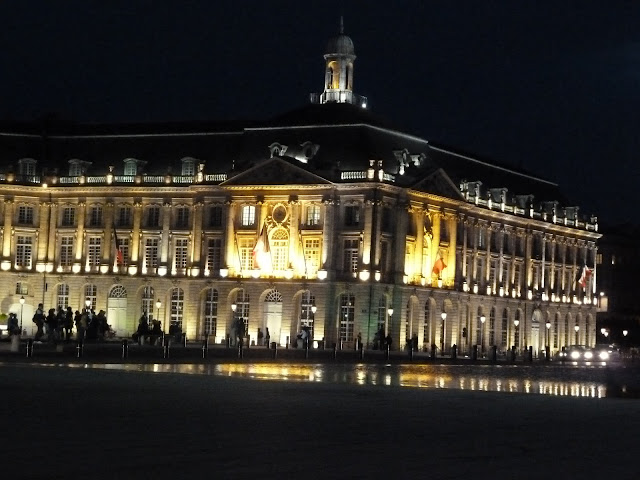 Posted by Colin Churcher at 8:38 AM