This was the schedule that the SNCF computer was reluctant to agree to, particularly the five minute connection at Salbris on the return.  Somebody should tell the SNCF computer that this connection is used by about 20 school kids every day.  It all worked out very well and I arrived back in Paris precisely on time at 1859.

The Paris Metro is always a pleasure to be in early in the morning.  The platforms sparkle and everything is spotlessly clean.  One great advantage is that one always knows how long one is going to have to wait for a train.  This takes out the uncertainty and allows one to relax.

One of the advantages of making this trip at this time of the year is that it is done in the light.  This meant that I could observe the concrete guideway that was built for the Bertin Aerotrain.
From Wilkipedia:
In 1969, a third, 18 km test track was built to test Aérotrain prototype I80. This test track was in Loiret, France, north from Orléans, stretching between Saran and Ruan, a location that would enable it to be used in a future Paris-Orléans line. The track was elevated 5 m above the ground, was supported by pillars and allowed speeds of 400 km/h. A platform stood at each end of the line to reverse the train, while a hangar on the central platform at Chevilly housed the test vehicle. This line, while abandoned, became a famous landmark subject to cosmetic disputes after the end of the Aérotrain programme, but it still exists today, and is clearly visible to the east of RN20 and the Paris-Orléans railway line. 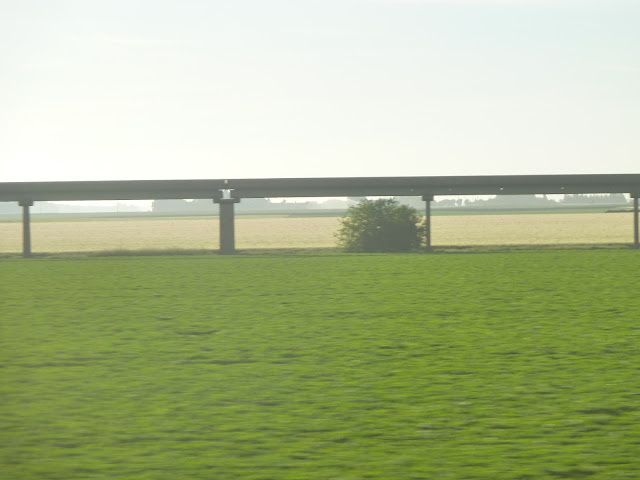 On the comfortable electric unit out of Les Aubrais I caught a quick glimpse of the Hotel Tatin home of the Tarte Tatin and arrival at Salbris gave me plenty of time to wander into the freight yard, now only used for work equipment and the Blanc a Argent trains.  There was no train there but plenty of people waiting which is always a good sign.  Soon a train appeared and we all piled in.

We waited expectantly for the off and finally the Salbris station mistress turned up, flirted with the driver, removed the red light, blew her whistle, waved her white baton with a green stripe and we were off.  Straight away it became evident that the trains have been slowed down considerably.  The maximum speed is now 40 kmph and it is much slower than that in many places.  The track has always been bad.  It has been relaid on most curves but the straight sections are very very rough indeed.  I took a look at a 2009 timetable when I returned to Paris and found that  Valencay to Romorantin has been increased from 50 minutes to 63 minutes while Salbris to Valencay has been increased from 77 minutes to 112 minutes.  The only good thing is that the trains can easily keep the published timetable.  A good feature is that the lower speeds will be better for the unique X74500 articulated units which are the mainstay of the service.  I only went for the ride so I enjoyed the slower speeds but it is not so good for anyone wanting to use the railway for real transport.
Ferte Imbault is the first stop and here we passed a train headed for Salbris.  There was much kissing of the station mistress, shaking of hands and an opportunity for the driver to take a smoke break.  Many of the stations are staffed and this ritual applies all down the line.  The station mistress comes out equipped with a white baton with a green stripe, having wound down the level crossing gates if necessary.  There is much flirting and eventually the red flag or light is removed, the whistle blown, even though the doors are shut and locked, the baton is waved and then there are a series of secret hand signals passed along with kisses blown before the train can leave.
There was even more flirting at Selles St. Denis.

We slowed to give a rabbit a chance to clear the rails while a pheasant poked its head up out of the grass to observe proceedings.  We finally made it to Romorantin by which time I was the only one on the train.  Most people got out at Faubourg Orleans in the outskirts of Romorantin where there is a large high school. I was joined by a man who was only going to Pruniers and had the front seat to myself for the rest of the entire trip.

I arrived at Valencay depressed and convinced the BA is on its last legs, which it has been for as long as I have known it (about 35 years) and wandered into the town to see what happens here on market day.  The main street is closed and traders set up their stalls (converted motor vans now).  There are a couple of interesting items but most are selling cheap clothing or houseware.  The market building was busy with a great selection of local produce and a couple were selling the Valencay chevre cheese, shaped like a pyramid with the top cut off.  I had a glass of red wine at le Bar des Sports and wandered back towards the station.  One of the problems with the new timetable is that now you have either 30 minutes or 2 and a half hours for the train out.

I wandered into this place and ordered a ham and cheese sandwich.  It was the biggest one I have ever seen.  The bread was about six inches wide and 15 inches long and was filled with ham, Cammembert and cornichon.  I only ate the bottom half of the bread.
Disconsolate, I walked around the BA yard at Valencay. 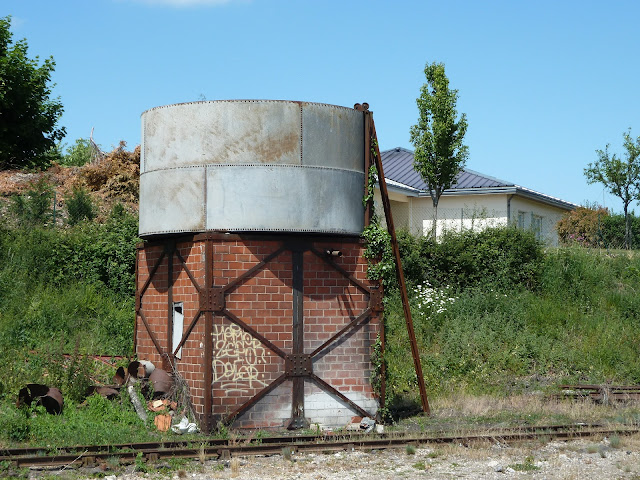 Then I started to look at the track and was amazed to find five new (three were dated 2009) SNCF heavy rail switches had been laid in and nicely ballasted.  The present service doesn't need a switch at all as the trains just come in and reverse. I cannot figure out why they would have put a new switch into the engine house or the freight yard.
An incredible amount of money has been spent at Valencay alone for a railway that carries very few passengers.
I went back to Romorantin.  The young lady conductor dutifully inspected my ticket even though she had seen me on the way in.  Much of this section has no ballast and even 40 kmph can be quite lively.  A deer scrambled away in front of us at Varennes.  There was more flirting and secret hand signals at Chabris.  The bridge over the River Chere is now 15 kmph.  The water weeds in the river have small white flowers and the river looked white from a distance. 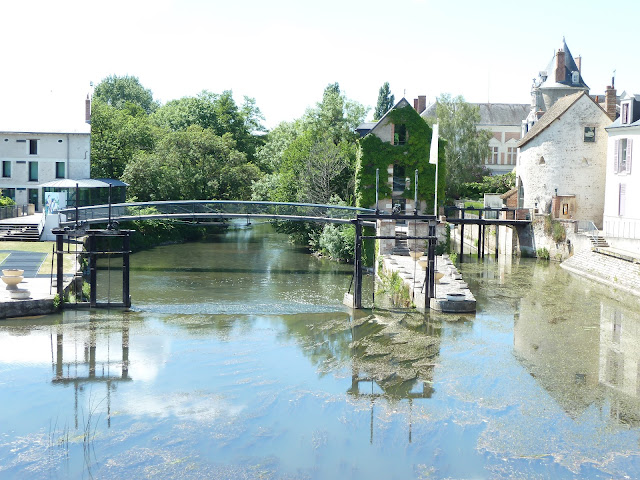 Romorantin was its usual attractive self but it seems to have been very badly hurt by by the recession and practically all of the specialty shops, traiteurs, patisseries, charcuteries etc. have  gone out of business to be replaced by employment agencies and real estate agents.  The restaurants have been taken over by north African and Lebanese.  I quickly returned to the station. 1983-built railcars X241 and X242 have received new paint but are not used very much.
There were not very many passengers from Romorantin but about forty schoolchildren joined at Faubourg Orleans.  They were all standing very close together on the platform because there is only one door on these trains.  I was expecting lots of noise and fooling around but they were very well behaved and just sat in their seats and spoke quietly to each other.  Surprisingly about twenty of them transferred at Salbris to the SNCF train as far as Lamotte Beuvron.
During the short layover at Les Aubrais I saw that the Orleans trams have now reached out as far as Les Aubrais station but I decided to leave this investigation for another day.
Click below to see BA images taken this day
Posted by Colin Churcher at 12:51 PM