As we were finishing breakfast I could see a tram stuck just by some track workers outside the hotel.  It was there for about ten minutes seemingly unable to go ahead or back up.  People started to get off and a number of trams were backed up behind.  It might have hit some construction equipment.

It started out pleasant today and we walked through the old town and enjoyed the architecture. 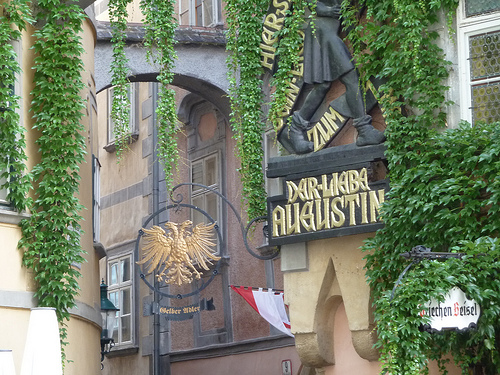 Having bought 24 hour transit passes we took a 1 tram around the ring.  We stopped in at the hotel to grab rain gear then took 2 tram then a D tram to Schloss Belvedere.  If anything, this is looking even better than when we were here before, the statues in the formal gardens have all been cleaned.  The views across Vienna were stunning. 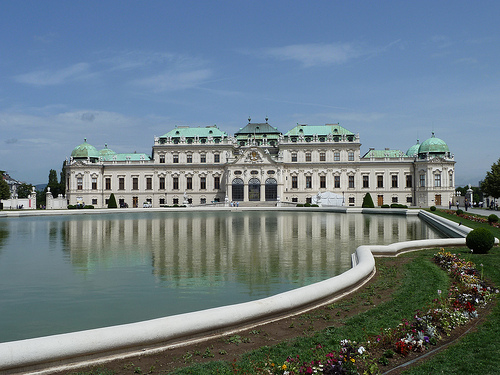 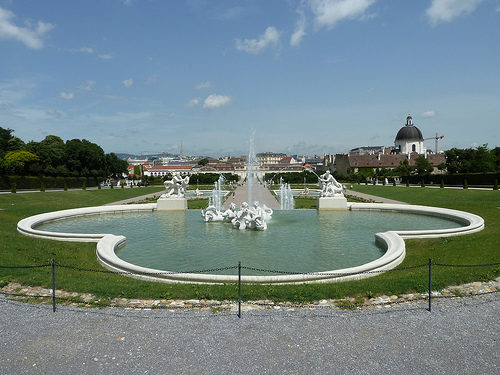 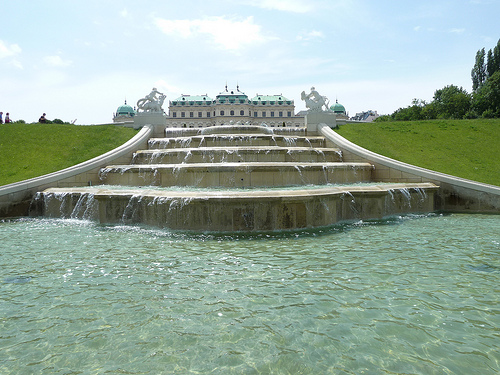 At the exit from the Schloss there is a strategically-placed sign for the Salm Brau next door.  We have been here a couple of times before and have always found it reliable and good value.  They brew the beer on the premises.  I had a litre and Mary a half litre.  We had spare ribs for two.  The picture doesn't really do it justice because a third rack is hidden under the top two.  The sauce was excellent and a little spicy.  We thought of Pat - beer in litre mugs, barbequed racks of ribs and fries.

We took the D tram back into town and it began to rain very heavily indeed.  We got off at the Ring and intended to return to Schwedplatz.  We managed a couple of stops then everything came to a grinding halt in the clockwise direction.  There were trams backed up for as far as we could see.  A man was gallantly wading through the water changing the switches by hand trying to extricate some trams with routes away from the Ring and short turning others.  With nothing particular to do we just stayed in the dry watching the fun.  The amazing thing about all this was that we could see blue sky in the distance so the storm wasn't very wide. 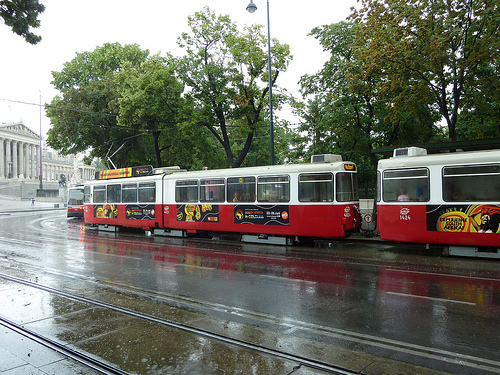 We finally caught a tram back to Schwedplatz - it changed its destination a couple of times but we weren't bothered at all.  By the time we got into the hotel the sun was shining brightly.

We went out for a walk around the old town later.  The ice cream parlors were doing a fine business and many people were sitting outside.  We came across the square in front of the Rathaus which was given over to benches and chairs with a ring of drinks and snacks sellers around the outside.   People were having a great time.  We found the Cafe Central which we had visited last time and stopped for an Aperol Spritz.  It began to rain and we went inside where a pianist was going full bore, including "Raindrops Keep Falling on my Head" which was very appropriate as the rain, thunder and lightning intensified.
Many people came in from the downpour, including a couple that were wearing plastic shopping bags over their heads.  We made our way back to the hotel in a slight rain.  The Rathaus party was completely abandoned.
Posted by Colin Churcher at 6:49 AM