Of the many highlights to this trip, today must rank as one of the biggest so far as railways are concerned.

We took the U-bahn to Wien Westbahnhof and caught the Zurich-bound RailJet to St. Polten getting there on the dot at 0957.  At Westbahnhof, the normal exit from the U-bahn was closed so we had a little difficulty in finding the station.  First class in the RailJet is very smooth and pleasant.  We were standing next to a double decker suburban set which are branded "Wiesel" - with a picture of a weasel on the side. 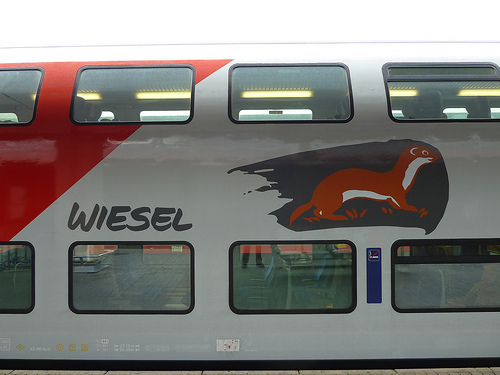 The narrow gauge (960mm) electric(6.6kv ac) line to Mariazell has caused the OBB some headaches in recent years.  Two new electric multiple units were delivered in 1994 but the OBB had trouble with them and older equipment was having to stand in.  There was also talk that the line, or part of it, would be converted to standard gauge.  The latest information I had was five years old so I didn't know what to expect.  I was blown away when I saw our train backing into the platform - ancient passenger cars and an OBB narrow gauge 2095 class, built 1958-62, diesel hydraulic.  The vacuum brakes had been coupled up and I nearly flipped when I noticed that the supposedly Bo-Bo trucks were using side rods.

Our Eurail Passes were not accepted on here so we paid cash. 55 euros for the two of us round trip for a five hour journey in splendid country seemed pretty good value.  Things got even better when I observed the incoming train.  The locomotive had side rods but it also had a pantograph and was one of the electric locomotives built for the line in 1909-1914.  A centenarian!
The first part of the journey is through farming country, some market gardening but some dairying with forests on the hilltops.  We saw rabbits and deer in the fields which were covered with molehills and poppies.  The further we went the steeper the valley sides and the character changed to heavily wooded, steeply graded, deep valleys with very little sign of human habitation.  There were high alpine meadows with lots of wild flowers and, in places, ferns, heather, dog roses and moss. There was some beautiful karst scenery but only for a short period.

Our first meet was with a diesel railcar - no sign of the new electrics.  At Boding we crossed another of the original electric locomotives.  A centenarian electric passing a 60 year-old diesel.
Arrival at Mariazell was exciting.  We were on time at 1257 and a train was due to depart at 1300.  There was another train with another electric locomotive, painted brown, waiting but this was reserved for a later train, so our diesel had to run round, couple up and do the brake test.  It left three minutes late which was a pretty creditable performance.
It was good to move around after 2 1/2 hours sitting on hard seats and we needed something to eat and drink.  The town of Mariazell is a pilgrimage destination and this was not the pilgrim time of year.  As we walked into town, all the cafes, restaurants and hotels were closed.  We finally came to the centre to find the church which was surrounded by a mess of pilgrimage/tourist junk.  We did find a cafe konditorei open and had lasagna and iced tea.
We hurried back to the station, stopping only for some honey cake, to find the yard completely devoid of trains.  A look at the timetable showed an arrival about five minutes before our train was due to depart so I got ready for a private run-past.  Sure enough, the brown electric locomotive, reappeared, side rods flashing, and ran around so that we could achieve an on time departure.
These old electrics seem to require a little coaxing to start.  There is a bit of a pause and the humming increases as the engine moves gently forward.  There is a fair bit of slack in the couplings so the train is started gently like a freight train in steam days where the strain is gradually increased as the slack is taken up one by one.  There is some banging around of the cars and, when they are all going in the same direction, the speed is increased.  Pretty soon the only noise that can be heard from the front is the whirring of the side rods.

We had a sudden stop just before Boding and then drew gently into the station.  It was announced that we would have a ten minute rest - while we were waiting for a late train to pass.  An opportunity for another private run past.  I got out to look at the old timer gently steaming from the roof.  To top it off the errant train, when it arrived, was hauled by another centenarian.  I was lost for words watching two centenarian electric locomotives pass each other on regular service trains.

Running 20 minutes late, we passed two other trains hauled by these old electrics as well as a couple of diesel railcars.

The track seems to be in pretty good condition which is a good sign.  There are a number of bridges including several curved viaducts in both stone and concrete.  Speeds are limited to 50 kmph for the electric locomotives and 60 kmph for the diesel locomotives.  I didn't see any of the electric multiple units all day.

The Mariazellerbahn also runs a steam locomotive and I saw a derelict one outside a roundhouse at Ober Grafendorf near St. Polten.

Although there was some smart station work we were unable to make up any time and we missed our planned connection back to Vienna at St. Polten.  We caught a late running local that stopped at all stations to Wien Westbahnhof.  It was a comfortable double decker Wiesel that ran as smooth as silk on the excellent roadbed and there were good views from the top deck.

We had an inkling for Wienerschnitzel and stopped off on the way back to the hotel.  The place we had in mind was full and we were in no mood to wait - besides, there were lots of oriental tourists, all with guidebooks in their hands, so we went to a hotel restaurant.  The schnitzel with potato salad was excellent.  A good end to an excellent day.

Posted by Colin Churcher at 1:51 PM