There was a lot of heavy rain in the night and consequently there was a great deal of standing water in the countryside.

The trip to the railway station was pretty easy because we had lots of time and the Prague metro is easy to use and quick.  However, it is deep and the escalators are very fast indeed.

The station is set up using numbered platforms rather than tracks.  Most platforms are islands so there are two tracks to each platform but they are not differentiated by a letter.  When the intending traveler arrives at the posted platform he doesn't know which side his train is on.  Admittedly there are good platform signs but this is compounded further by the fact that platforms are very long and trains may start from either end.  Thus it is possible for four trains to start at the same time from a platform with the same number.  There are excellent electronic boards showing the composition of the train but no sector indications.  Maybe they don't know where the drivers are going to stop the trains.  The first train in Europe ran into a station very close to here from Linz almost 200 years ago.  It is amazing, that in 200 years the railway hasn't thought this through.

The entire train was Czech equipment but the locomotive was Austrian, thus ensuring that we would make it through.  We were in the one first class car right next to the locomotive and the air conditioning worked throughout.  It was only three quarters full but all tourists either Orientals who had enormous cases or Indians who hadn't a cluse where to put their cases.  As we started off there was an announcement enticing us to come to the dining car where a sumptuous new gourmet menu awaited us.  We went to the dining car and were ceremoniously handed a menu which was full of exciting things such as salmon, beef, chicken, pork, dumplings etc.  When he came to take our order the waiter explained that we could have anything we liked on the menu provided it was chicken but he could prepare it in any of the ways shown such as with horseradish sauce.  We settled for spinach-stuffed chicken with spinach and smashed potatoes.  The  potatoes were pretty good and there was garlic in the spinach and big chunks of garlic in the stuffed chicken.  The meal was fine and we washed it down with a Pilsner Urquell (Colin) and Velkopopovich Kozel (dark) (Mary).  It should be mentioned that there are very few railways now that have dining cars where the meals are prepared from scratch on board.  We paid the bill in Czech money and left a tip which consisted of our remaining Czech shrapnel and two Prague tram tickets.  The air conditioning in the Dining Car had failed so we were happy to return to the cool of our car.

On leaving Prague the WC had no toilet paper (the train started at Prague and should have been fully provisioned).  Somebody complained and the conductor was seen carrying a roll of Czech army sandpaper for our toilet.  I bet one of the second class toilets was then without paper.

We were stabbed twice by freight trains although there is so much slack in the schedule that we were still able to make the time to the border.  A slack timetable allows for sloppy operating.  At Breclav the Czech crew were replaced with an OBB Austrian crew and the last part of the journey was accomplished quickly.  We left Wien Simmering on time but had a good run through the work on the new station so we arrived 12 minutes early.  The Vienna subway is very easy to use and we quickly found the hotel - there are trams going past our balcony.  Vienna has the largest tram system in the world.
In the evening we found a restaurant in the old city and had goulash/spinach dumplings.  Some work is going on at Stephansdom and we just caught the end of an organ recital. 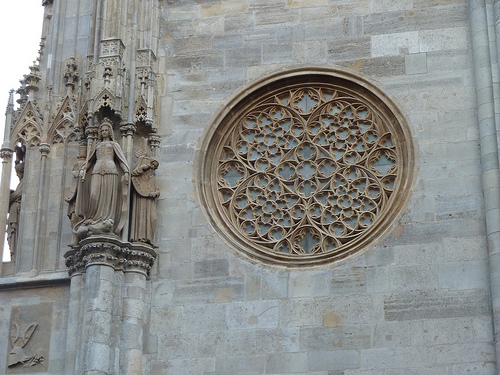 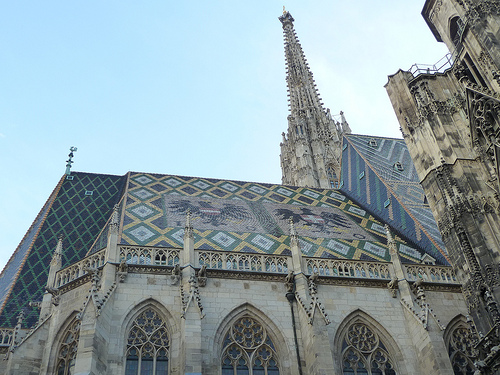 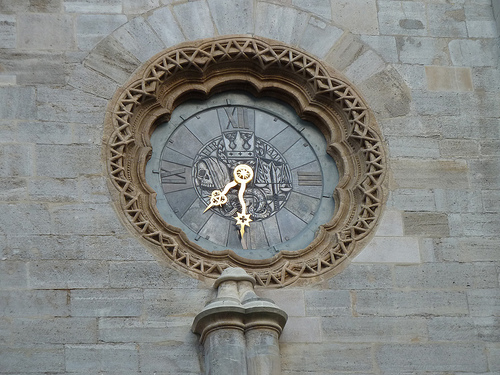 Posted by Colin Churcher at 8:08 AM