The usual calm of the airport departure lounge was shattered when an intending passenger collapsed and lay motionless on the floor.  I approached him with some trepidation, frantically trying to remember my CPR/AED training only to find that a qualified doctor was on the scene.  The airport emergency staff arrived quickly and with a lot of equipment and he was soon taken away on a stretcher.  We were concerned that taking off his bags would delay our departure but Air Canada sucked us in at Ottawa and blew us out at Frankfurt on time.

I watched "The King's Speech" while eating my business class supper.  The use of Mozart's overture to the Marriage of Figaro and the introduction to the Clarinet Concerto was magnificent as were the Beethoven 7th Symphony (slow movement) and Emperor Piano Concerto.

Frankfurt airport is amazing.  You don't need a landing card.  We were bussed into the terminal but walked straight through immigration to find our bags were waiting for us.  It was then plain sailing to the DB information desk where our Eurail passes were quickly validated leaving us with an hour and a half to catch the ICE train to Dortmund.

Bill took this picture and with his very penetrating voice which carries a great distance mentioned that he had also taken a picture of "That beautiful girl with the long blond hair."  She understood English and smiled politely.  A short time later she was on the platform and came up to me asking how to get to platform 4 - we were on platform 6.  Unfortunately it seems that she really did want to get to platform 4.

The platforms are bright and airy.
The 1109 ICE train to Dortmund was very crowded as far as Koln where it emptied out.  There were people sitting on the floor in first class. We passed many fields of bright yellow rape as well as a few fields of yellow mustard.  The trees are also coming into blossom, particularly the chestnuts and fruit trees.  Mistletoe was visible in a few locations. There were several tunnels traversed at high speed which affected the ears by the increase in air pressure.  I could see several pitheads (the above-ground winding machinery for coal mines) although it was difficult to see whether they were still in use.

Modeling idea - plastic sheet set over a mound and held in place with old tires.
We arrived at Dortmund about five minutes late as a result of sloppy station work.  This didn`t cause any problems as we had an hour to wait for our onward train to Hamburg.

Dortmund
Dortmund is no raving hell and I was pleased to leave.  This was on the 1425 Intercity train composed of older stock similar to the UIC Corail cars that are being phased out in France.  The car rode well and gave us a good ride although the top speed was only 200 kmph.  There was a couple in our compartment with an old English Spaniel.  He was very good indeed and didn`t bark once. 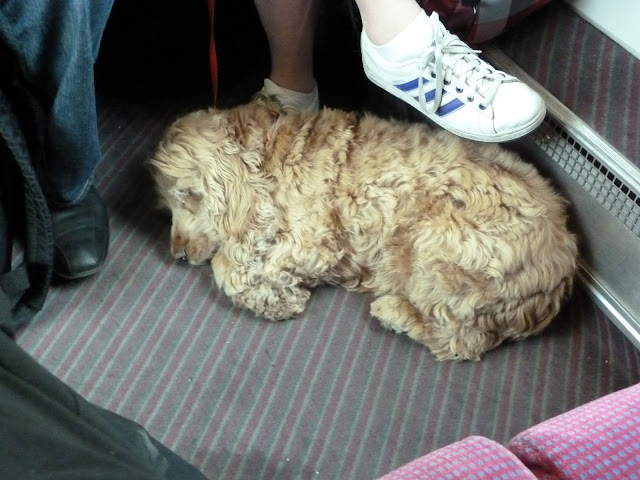 VIA has banned all pets from its trains yet this little guy didn`t cause any harm.

Martin and Colin commenting at how close the station is to the hotel.
Martin chose the hotel very well indeed.  It is straight across the street from the main station entrance.  There is free internet service in the rooms and the room identification card allows us free travel on the local transport network.  We had dinner in the hotel restaurant.  Duck with red cabbage and dumplings made from potato and bread - they wobbled on the plate.  Afterward we walked around a little and then went for an early bed.

Hamburg station in the evening.
Posted by Colin Churcher at 12:18 PM