0803 Basel to Neuchatel
0937 Neuchatel to La Chaux de Fonds
1102 La Chaux de Fonds to Les Ponts de Martel
1128 Les Ponts de Martel to La Chaux de Fomds
1203 La Chaux de Fonds to Noirmont
1332 Noirmont to Glovelier
1436 Glovelier to Porentruy
1507 Porentruy to Basel
Neither Martin nor I have been to the Swiss Jura so today was an experiment.  It turned out completely successfully and my one thought is that I would really like to return.
Once again, all trains today were on time. SBB threw a bit of a curve at Basel when they uncoupled the first part of the train so we have to get into the second part. The first leg to Neuchatel was quick and afforded good views over the lake. There are many vineyards on this section all facing the lake. In one place there was an entire hillside covered in vines with a solitary church in the middle.
After Neuchatel we diverged away from the lake and climbed in into the Jura through mixed farmland with mixed forest. Many houses had moss growing on the roof.  There was a reversal of direction at a station in the middle of nowhere.
La Chaux de Fonds seems a pleasant place. Laid back and with some wide streets. One trolley bus was highly decorated.   A lady at the convenience store explained that “septante” and “nonante” are used instead of "soixante-dix" and "quatre-vingt-dix" as in Belgium.  I deliberately bought a bottle of Vivella at CHF2.90 so she would say nonante and give me the excuse to talk about it.  Like everyone else in this region, she was helpful and friendly.  I started learning French over 50 years ago so septante and nonante are taking some time to assimilate.
We asked the lady at the information office in the station about the trains to Les Ponts de Martel (CF Neuchatelois). She looked at us as if we were crazy but produced a timetable. This line is very short, about 25 minutes, and they have two narrow gauge railcars – we had #6 “La Chaux de Fonds”.   Most of the route is through a broad wide valley with cattle and sheep farming. The valley was green (with yellow dandelions) but the hillsides and tops were mixed forest. There are many farms and the houses are all very large. Each one had a huge stack of split firewood. They keep cattle in their backyards in the town. 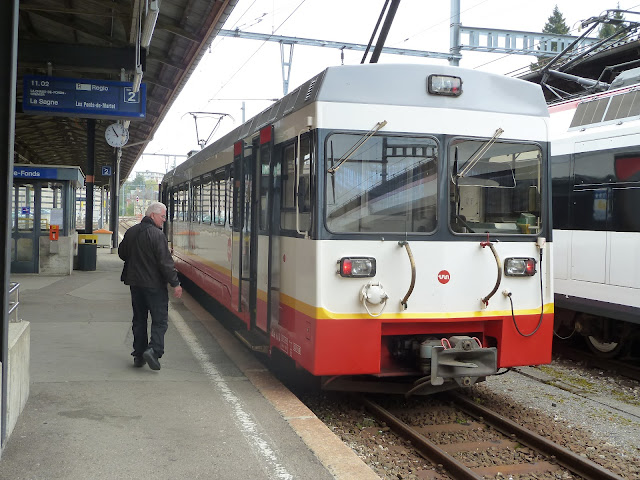 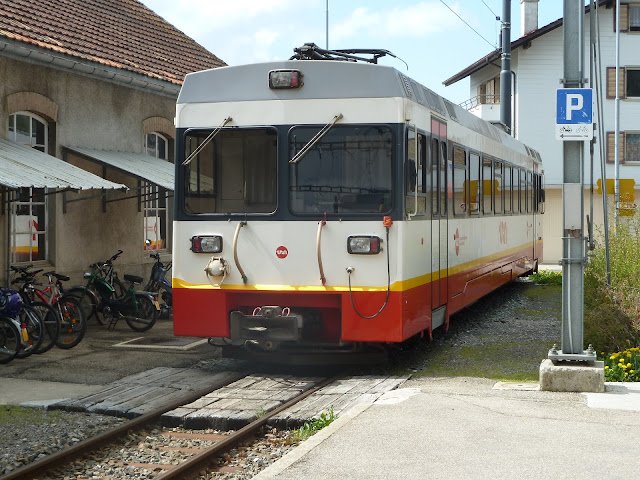 The second CFN car at Les Ponts de Martel
The railway staff were all very friendly. The train drivers all said “Bonjour” and “Merci, au revoir” and several passengers said “Bonjour” on getting in.  The journey takes only 25 minutes but there are several stops and it would be good walking country. As with everywhere else in Switzerland the service is roughly hourly.
We returned to La Chaux de Fonds to catch the CF du Jura train to Noirmont.  On the way back the train is above the SBB line into La Chaux de Fonds.  Just before it enters a narrow tunnel there are two posts secured into the ground with concrete and with four horizontally placed brooms on each side.  These are presumably clearance warnings for the tunnel. There were six trains in the station and all left within a minute or so of each other. Another example of SBB coordination.

Five trains of three companies and two gauges all connecting with each other at La Chaux de Fonds.  The sixth train (CF du Jura) is out of sight to the right. 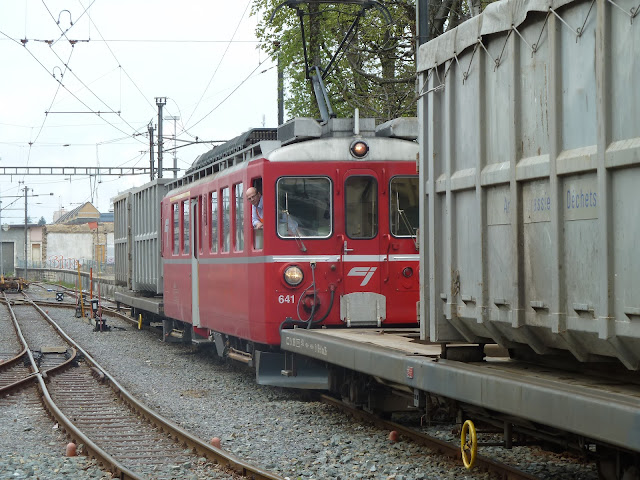 At La Chaux de Fonds a CF du Jura motor was switching containers of household waste, we could smell it, for unloading on to trucks.  We hoped that this would be our train - it would have been a mixed, albeit a smelly one, but they provided a railcar instead,

Large houses are common in this area 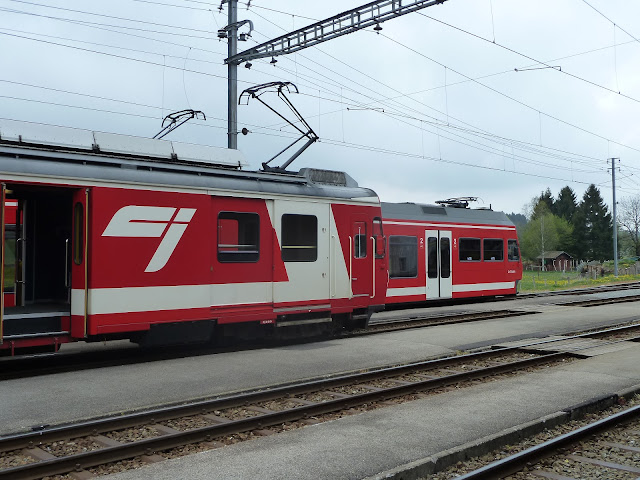 At Noirmont there was a meet with the train in the opposite direction as well as a connection with a train along the branch to Tavannes. 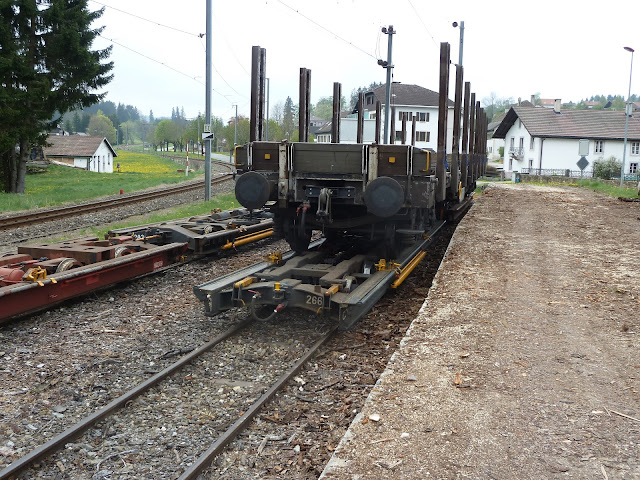 Standard gauge flatcar on a narrow gauge transporter.
We left along the street and at one point had to cross the trolley bus wires. I don't know how this was done (I later examined a similar crossing at Linz).  The countryside here is more in the form of a park with long stretches of grass interspersed with mature trees. At Noirmont we took a look at a long standard gauge flat wagon that was standing on two narrow gauge transporter wagons, ready to be loaded with logs. We had lunch at a patisserie/boulangerie and were served by a very pleasant lady. It is a joy being able to understand the language. 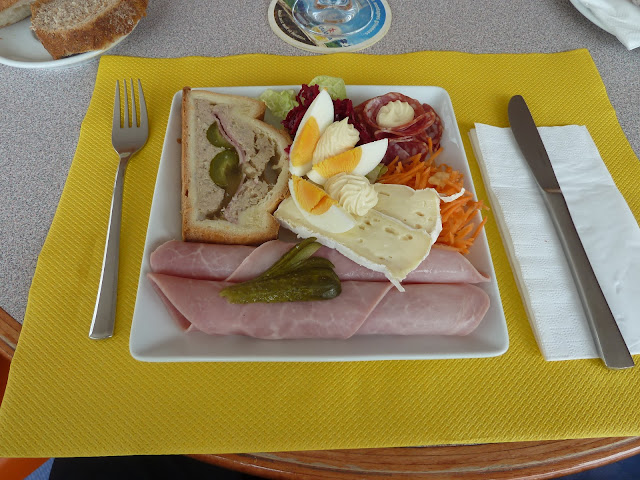 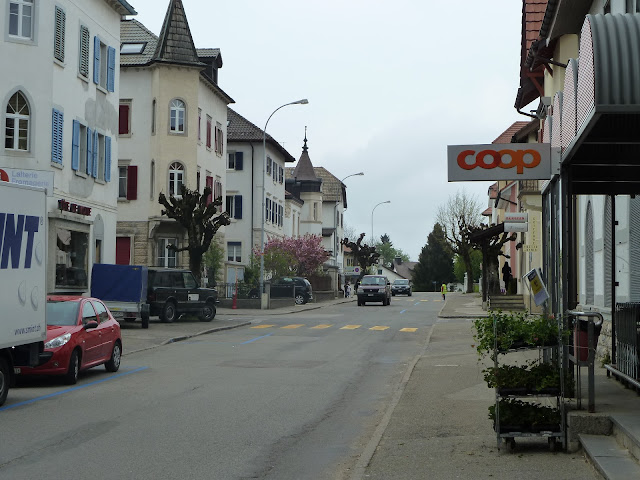 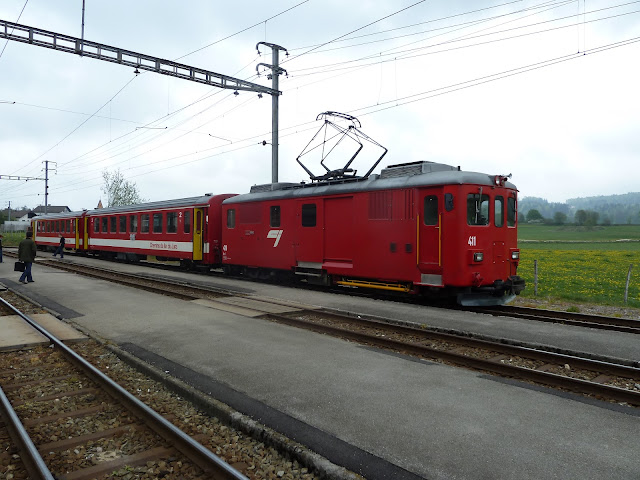 A 50 year old locomotive was being used on the branch line to Tavannes.
We took the next train towards Glovelier but had to transfer to a bus at Sainelegier because the line was closed for maintenance. We thus missed the most exciting part of the trip – the spirals on the approach to Glovelier.  The arrival in Glovelier would have been interesting as the trains stop in the middle of the street outside the SBB station. 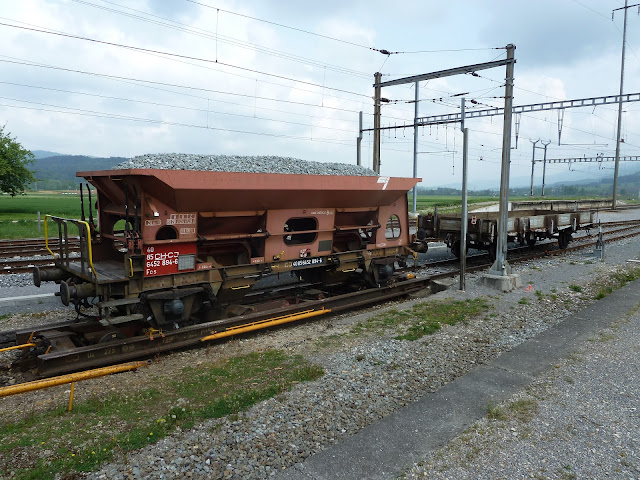 At Glovelier we saw several standard gauge ballast cars on narrow gauge transporter wagons ready for the track maintenance which was taking place just on the outskirts of the town. 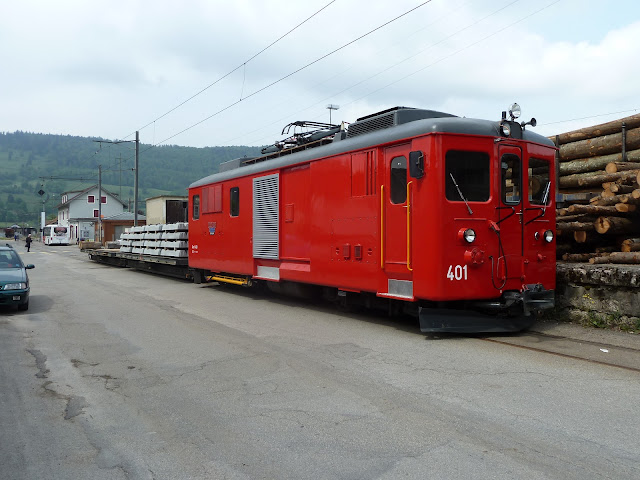 Another 50-year old locomotive with a load of ties.
Click above to see pictures of the CF du Jura.
In several places we saw people going around in a horse and trap.
The ride to Porentruy was good, the highlight being a high bridge over a deep gorge. The return to Basel was uneventful. The new electric unit was very comfortable. The tv-type announcement screen not only shows the next four or five stops but also shows the connections and the next station- connections with SBB trains, city buses and post buses. If only OC Transpo had bought this system instead of the antiquated system they have just installed.
We returned to Basel in good time to visit three railway model shops. The models are superb but the prices are crazy. Took a tram to Marktplaz and back.

The meter gauge trams in Basel are run by two companies BLT (yellow) and BVB (green).  Both have a number of trams decorated with advertising.  They use a common ticket system and common terminals such as in front of the SBB station.  The system is integrated in such a way that one doesn't realize which company is being used.

Trackwork can be very complex and some gauntlet track is used to avoid having moving parts in the pavement used by vehicles.  In some locations, right in front of our hotel, for example, the track is set in grass to give the whole area a parkland feel.

Some new sections have been inserted with low floors and bicycle racks. 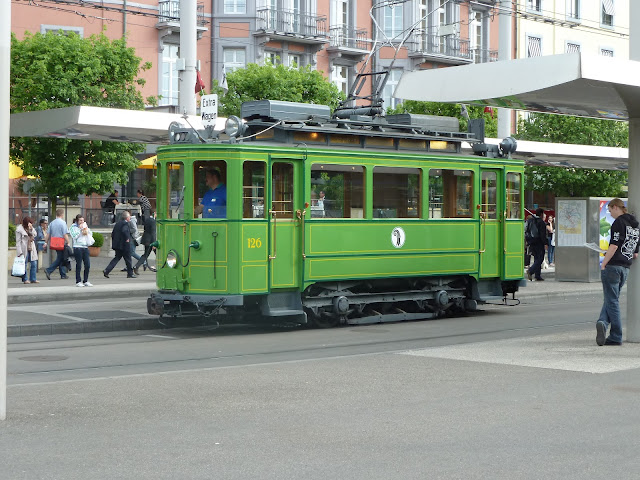 There is a fleet of heritage cars that is used mainly at weekends.
Click above top see all my images of the Basel trams.
Posted by Colin Churcher at 9:53 PM