IC 565 0833 Basel to Zurich 0926
ICN 1009 Zurich to St. Gallen 1123
AB 2141 1407 St. Gallen to Gais 1439
AB 1451 Gais to Altstatten 1513
Bus to Altstatten SBB
RE 3823 Altstatten to Sargans 1612
IC 582 Sargans to Basel 1827
The journey to Zurich was completed quickly and easily and we had time in Zurich to look at the trams as well as the bridge over the river. We passed some very narrow gauge tracks just outside of Basel. This turned out to be the 750 mm gauge Waldenburgerbahn running from Liestal to Waldenburg. A quick review of the timetable shows we could fit this in on Wednesday.
The leg to St. Gallen was completed effortlessly in one of the tilting trains. The tilt was very pronounced around some of the curves. We passed an advert for “Qualitti Shitti” and have no idea to what this referred. The mind boggles.
Martin found the railway model shop close to the station and we spent some time there looking at the wonderful models and laughing at the outrageous prices. One four-car S-bahn double decker, custom painted with a bright special design was 1699 Swiss francs. As we left the shop Bill said:
“If we're not gonna buy we're gonna eat.”

Lunch on the station platform 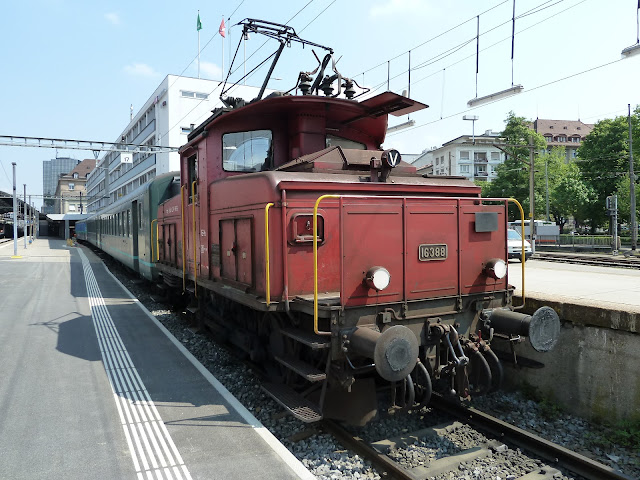 We found this 1943 vintage electric shunter at St. Gallen
After a quick lunch we met Ms. Alexandra Baumgartner who was our guide on the Appenzellerbahn. Alexandra is a driver on the railway and knew the operation very thoroughly indeed. She was able to answer all of our questions and didn't pull any punches. She took us into the control room upstairs and introduced us to the two controllers who are on duty during the day. The system is currently being changed to a modern computer-based one although they still have an old entrance-exit, mosaic-type, system that controls the area around St. Gallen itself. The computer system also shows some of the SBB trains so they can ensure that connections are not missed. We also spent some time with the Manager of operations planning which is quite a tall job for one man.
Alexandra then took us to the train and introduced us to the driver. The first part was the run to Gais. Immediately leaving the St. Gallen yard we entered the first the rack section. The train is driven on to the rack at a very slow speed and this must be held until the cogs are in place and an audible note is sounded. The 100 driving position is selected (10%) and speed may then be increased as authorized. This is a spectacular climb which, at one point, is the steepest gradient and sharpest curve on any railway in Switzerland. The rack runs across several roads.

It was difficult to see the cogs underneath the train.

Sharply curved and heavily graded track.
At the top of the rack section we met another train, spring switches being used at each end of the siding. This line is quite nerve racking for the drivers because there are plenty of opportunities for collisions with road vehicles. We came close to a collision with a car hauling a trailer. 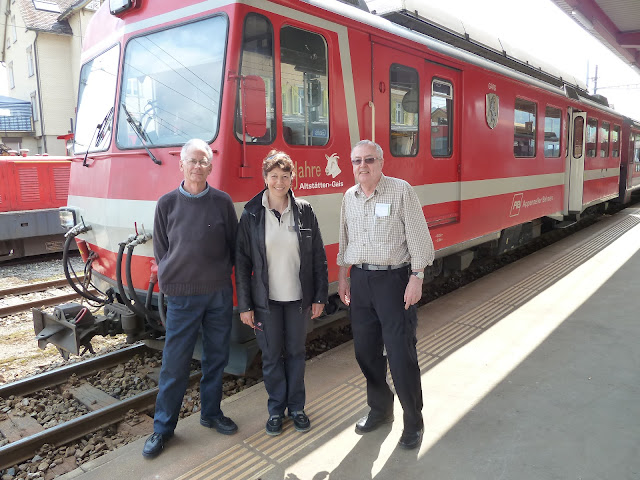 At Gais
Gais was reached in good style and we were introduced to the driver of the train to Altstatten. This rack section is steeper that the previous one (16%) and the 160 setting has to be selected. There is a gradual climb up from Gais but this section has fewer problems with road vehicles. The first rack section is engaged and it is like falling of the edge of the earth as the drop is immediate and spectacular. There are several rack sections on the descent into Altstatten all of them very steep. 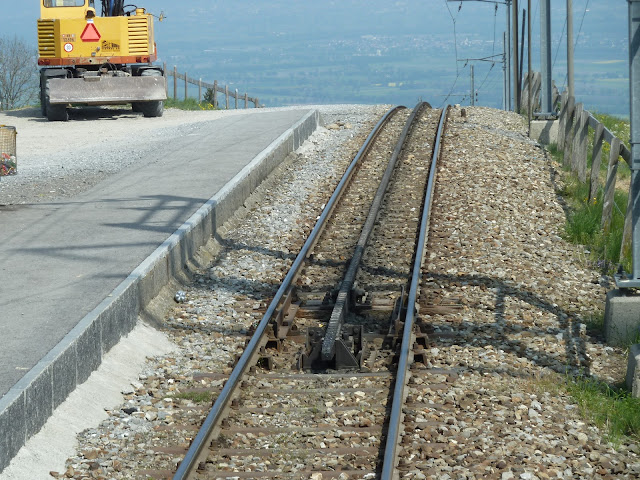 Start of the rack section from Gais

All too soon we has to say goodbye to Alexandra who has a great deal of technical knowledge with a disarming and pleasant way of talking to us. We walked a little way through the pleasant town and then caught a bus the rest of the way to the SBB station in plenty of time to catch the train to Sargans. This part is along the pleasant Rhine valley with good views of sheer cliffs on the east and Lichtenstein on the west. The connection at Sargans brought us back to Basel on time with just one stop at Zurich.

Click above to see all my pictures of the Appenzellerbahn

After eating Italian, Bill and I took a couple of tram rides, first into the old part pf town, then across the Rhine into Germany to the DB station and then return to the SBB station and the hotel. The part across the river seems a little seedier than the Swiss part but there are some very imposing buildings on both sides, the red Market Building and the enormous Exhibition Square for example.
A great day with lots of interest.
Posted by Colin Churcher at 6:09 AM