0803 Basel to Goschenen
1112 Goschenen to Andermatt
1128 Andermatt to Goschenen
1208 Goschenen to Arth Goldau
1348 Arth Goldau to Luzern
1455 Luzern to Interlaken
1835 Interlaken West to Basel
We intended to take the 0803 only as far as Luzern and then travel on the steamer to Viznau for the Rigibahn. However, it was very cloudy and there would have been no point in going up the expensive Rigibahn if it were cloudy at the top. We decided to go straight through to Goschenen and watch a couple of trains using the Gotthardt tunnel.
Olten, home of Lindt chocolate, is an industrial town but is set in pleasant farming country. The small towns are very colourful with flowering chestnut and lilac trees. One town had a small white church with a bright red spire. The meadows were covered with buttercups and cow parsley. Around Luzern we could see swans and moor hens and there were many allotments with their individual, quirky, huts. There were small flocks of sheep and goats. As we climbed the Gotthardt we were surprised to see palm trees. 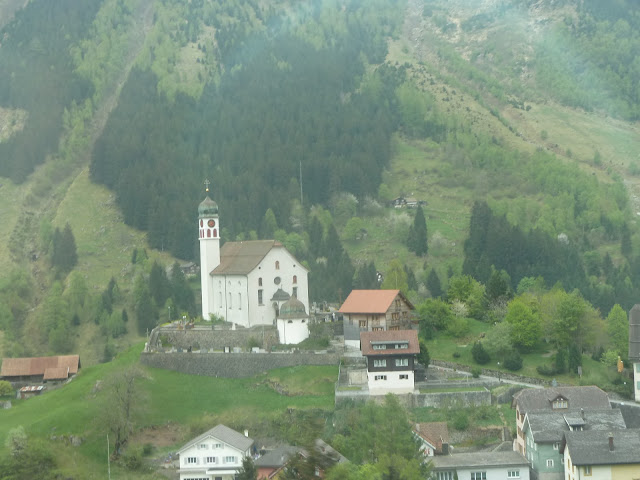 As we climbed through the spirals we passed the church at Wassen, first from below and twice from above.  The views are especially good from the Panorama car, with its tall windows curved into the roof -  we used this in both directions.
Goschenen was cold and did not appeal.  We watched our train disappear into the tunnel under the protection of a red signal.  But the signal soon changed to green and a following freight train entered the tunnel only about five minutes after.  Having looked at a narrow gauge three-way switch, we decided to take the Matterhorn Gornergratt Bahn (MGB) narrow gauge rack train to Andermatt and back. We were able to travel in the vestibule behind the driver of the driving trailer and observe the action. Of course we are all now experts on rack operation and fully understood what was happening.  At Andermatt we saw the Glacier Express but decided to return, through the avalanche sheds to Goschenen. 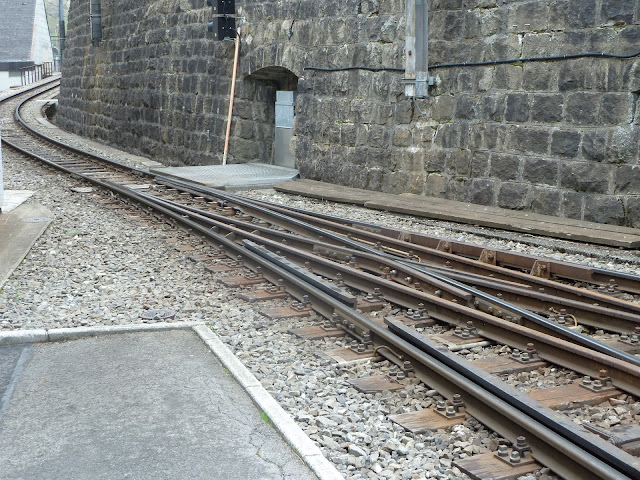 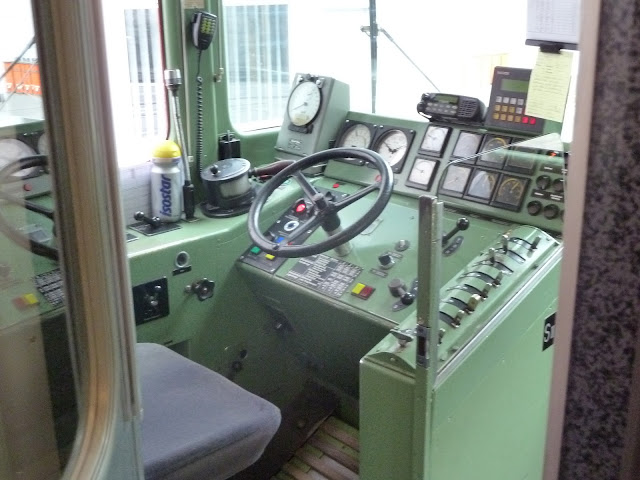 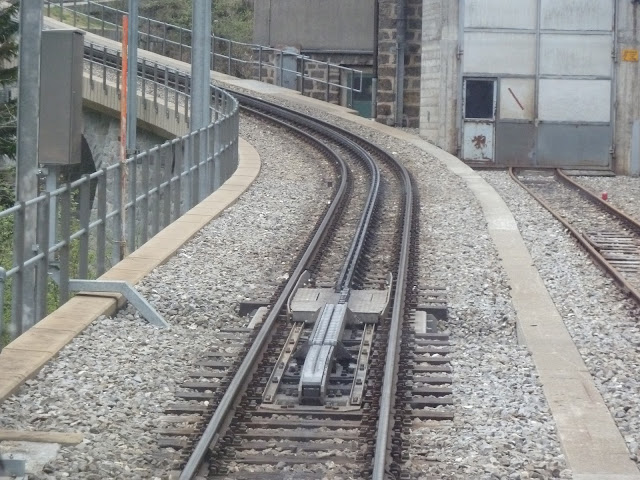 Entering the rack at Goschenen. 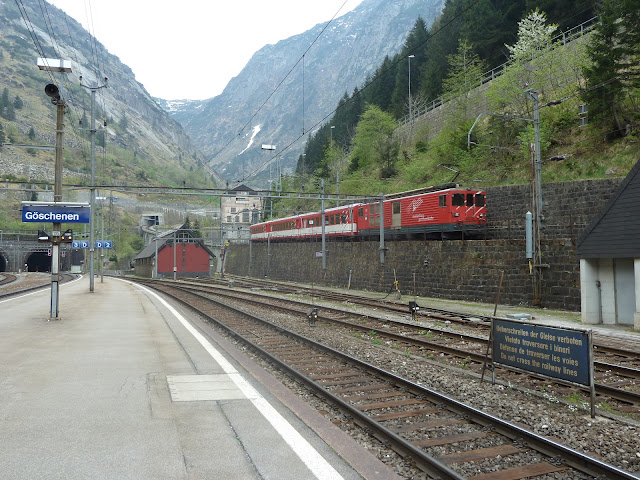 An MGB train, locomotive at the bottom end, beginning the climb from Gochenen to Andermatt. 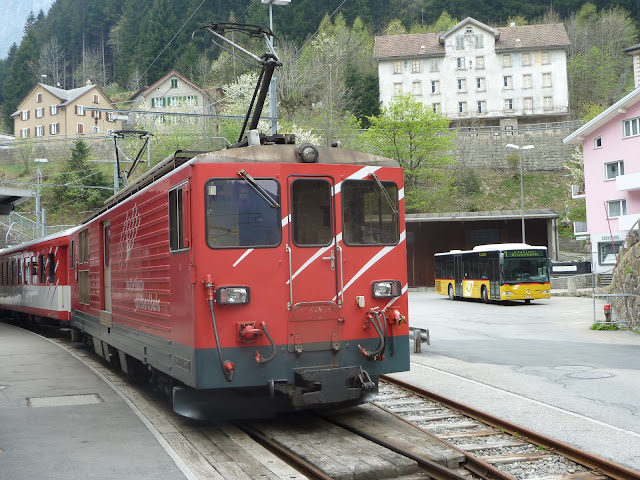 The Post Bus has just made a connection with the MGB at Goschenen.

Click above to see all pictures of the MGB
The next train through Goschenen brought us back, past the church another three times, to Arth Goldau where we visited the Rigi bahn station only to find there was still a great deal of cloud at the top. We decided to abort the Rigi bahn and caught the next train to Luzern, watching a Rigi passenger train switching a couple of freight cars using a bar coupler connection.

I tested the telephoto on my camera on two grebes at Luzern.
We gave Bill a very, very quick tour of Luzern in which he saw and photographed all the important places in ten minutes. It was then back to the Panorama car of the Golden Pass Express all the way through to Interlaken. This was a delightful trip which included some severe rack sections.
A circular white sign is used at the end/beginning of each rack section:
A – indicated entering the rack
E – indicates leaving the rack
Note to John Shipman. On the section between Luzern and Miringen the rock cuts were steep and very narrow but we didn't hit one once. The railway must have checked the width of the cuts to ensure rolling stock cleared them.
At Meiringen I took advantage of the change of direction to take a quick look at the Meiringen Interkirchen train standing in a platform waiting to make its short sprint up the line. 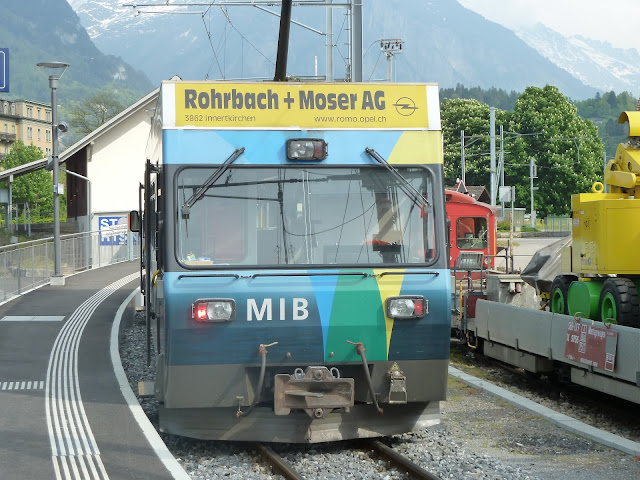 A Meiringen Interkirchen rain at Meiringen.  I have been through here twice before and had no idea that it existed until I looked at the map today
Interlaken was full of tourists, mostly Asian. We walked through the town and found a model shop but the prices were outrageous and we left without buying anything. A little further along we found a restaurant where we had rosti as well as veal sausage, both good. The place was geared up for Asians and management was getting people all fired up to eat. It was a good job we finished when we did – it looked as if they were about to start a karaoke session.
The return to Basel was uneventful with the pleasant ride alongside the lake to Spiez and Thun.
Posted by Colin Churcher at 4:42 PM