0801 Basel to Bern
0904 Bern to Fribourg
1008 bus SBB Fribourg to Coteau
1241 bus Coteau to SBB Fribourg
1332 Fribourg to Ins (CF Fribourgeois)
1433 Ins to Biel/Bienne (Aare Seeland Mobil)
1549 Biel/Bienne to Basel
1701 Basel to Liestal
1735 Liestal to Waldenburg (Waldenburgerbahn)
1808 Waldenburg to Oberdorf (Waldenburgerbahn)
1907 Oberdorf to Liestal (Waldenburgerbahn)
1933 Liestal to Basel
The train from Basel to Bern was a DB ICE-1 which needed some attention as the truck was getting worn. Nevertheless it reached 197 kmph on several occasions.  We saw some domesticated deer deer in a field. There was just a short time available to glimpse the Bern red trams before catching the train to Fribourg. This gave us some time to check in with the Tourist Office and get a cup of coffee. The server spoke French and we enjoyed practising to get our French up to speed.
I said” Je vous remercie infiniement”
to which she replied “Mais non, c'est moi qui dois vous remercier - -infiniement”
This caused quite a conversation in which we were trying to speak French while she and another who joined in were trying to speak English. The second girl was Portuguese.

Reading up on the model railway.
Buying the tickets for the bus I was completely stumped by the price and the change until I realized that they use the word “nonante” instead of “Quatre-vingt dix”.
The bus to the model railway turned up as right on the advertised and the driver waited at the station until there was a “ping” like an alarm clock which told him it was time to leave. There was an automated announcement system so we knew where to get off. The model railway is very easy to find.
The Chemin de fer du Kaeserburg is extremely well done but it is very different from Miniatur Wunderland. This models Swiss prototype very precisely and they try to model the railway within the landscape. There are large areas with no railway but which show a part of Swiss life – a circus for example. There are two entrance-exit mosaic-type CTC boards and trains are controlled from here. Movement is by signal indication and, unlike MW, the signals have a very real function in the operation. The layout is extensive but much smaller than MW. 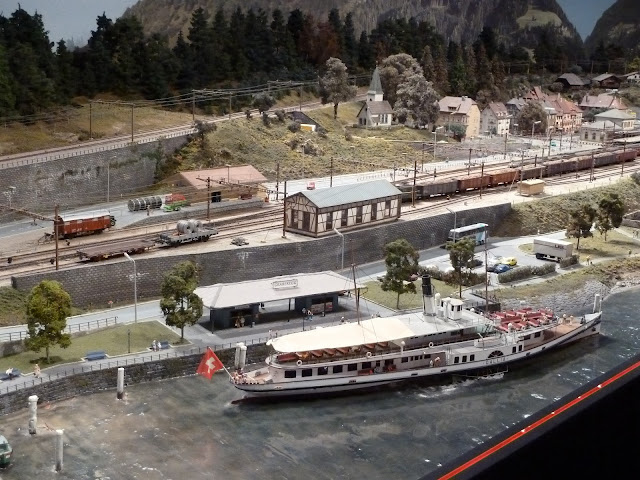 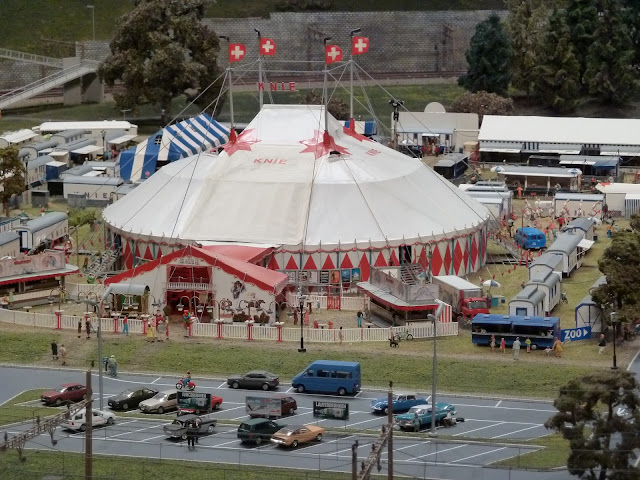 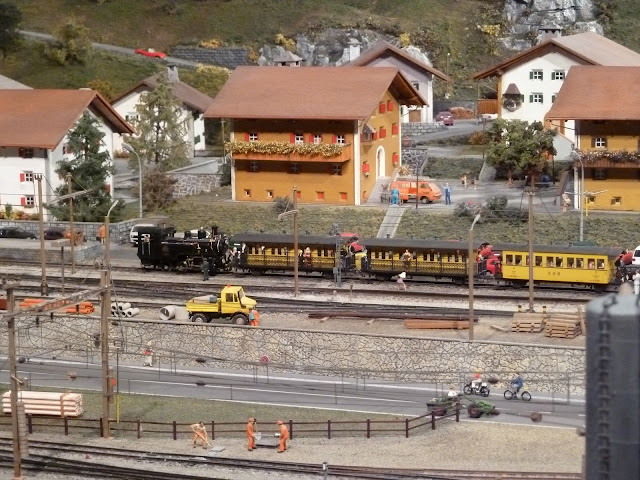 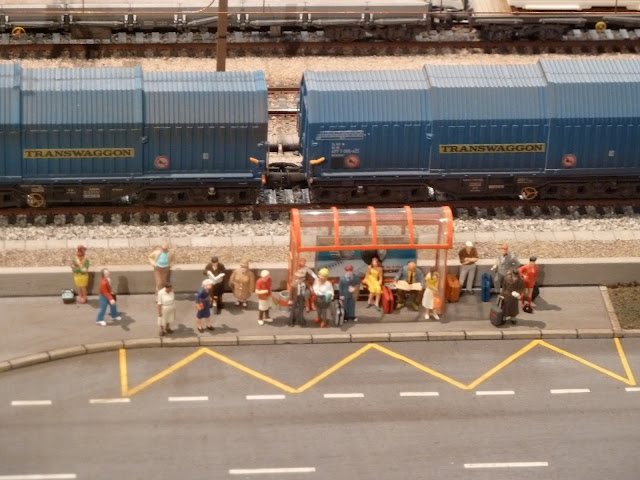 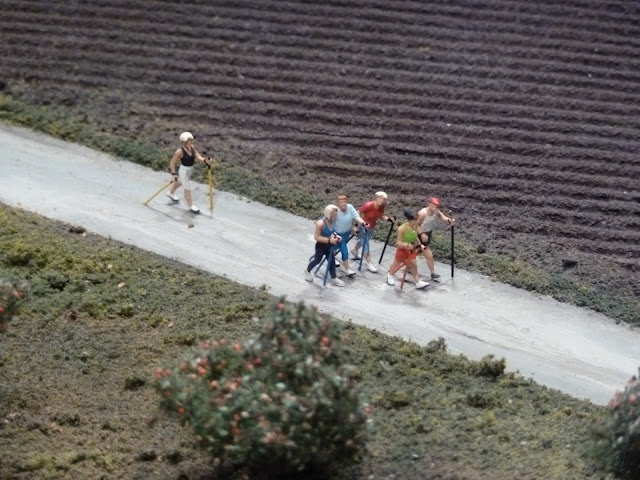 Click above to see pictures of Kaeserburg in the form of a slide show.
There was a very good audio-visual introduction after which we went into the staging area. It was some time before we went in to see the trains. There is good attention to detail but Kaeserburg is not crowded so there is room for empty roads and fields between the various vignettes. The railway is only open a few days in the week and it was not crowded. The railway is housed in a purpose-built building. There is another section planned for the narrow gauge but there are not great plans to extend. It doesn't try to be the biggest or to break records – just to be good. In this it exceeds admirably.
The bus back to Fribourg was on, again, time and we walked through the town to see the funicular with its great views over the old town. The trees are well in bloom now and add a wonderful dash of color all over. 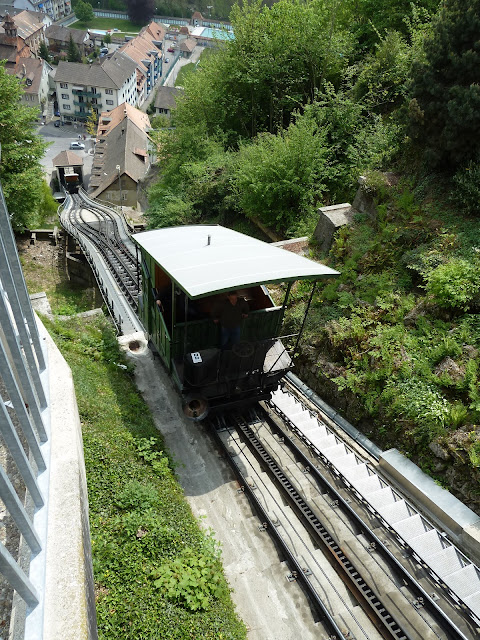 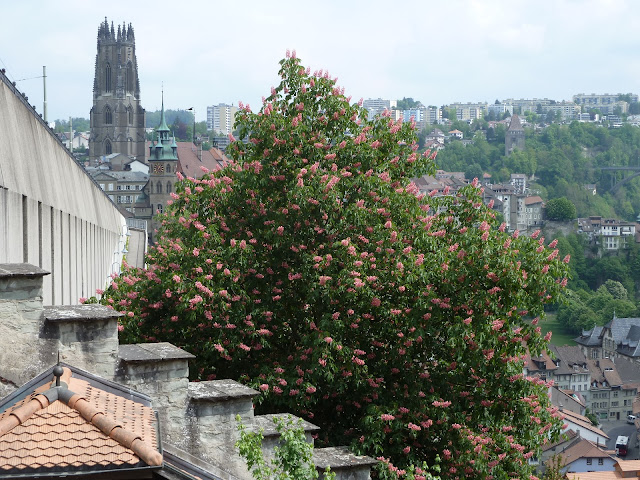 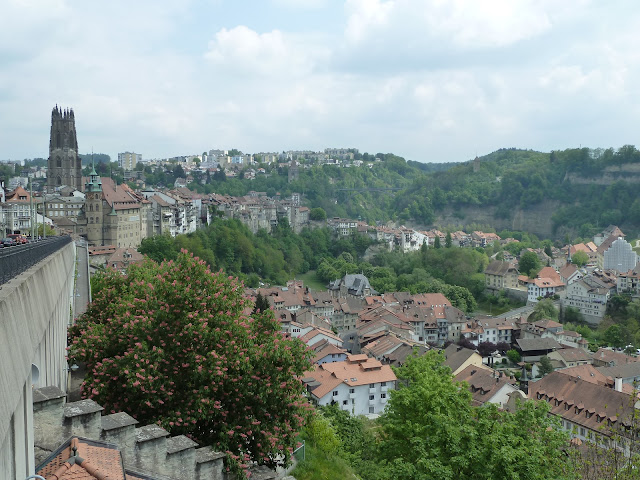 We decided to grab a sandwich and leave on the return a little earlier. We caught the CF Friebourgeouis which is a standard gauge electrified railway with mainly single line and passing loops. This is pleasant farming country with pollarded trees, some arable and cattle and sheep. The mistletoe was very evident.

CF Fribourgeois at Ins.
At Inns the Aare Seeland Mobil train left at 1433 which gave us about 25 minutes to admire or cuss the F-18 jet fighters which were practicing formation aerobatics over our heads and to watch a small work shunter run around a flatcar. This manoeuvre was made more difficult by the Post Bus which was blocking its path down the road. Just before the train arrived an Suv came and parked on the tracks and a few teenagers were hanging around just by it. Seems like a laid back operation.

The ASM is a roadside tramway using very modern low floor trams on very well maintained right of way. It meanders around through market gardens with very dark soil. The route is a little curious as it seems to follow boundary lines rather than take a direct route. There are many fruit trees - apricot, cherry and apple. In one field there was a revolving back scratcher that a cow was using and obviously enjoying. Contented cows give good milk. The last part of the run gives excellent views of Lac Bienne.
Click here to see pictures of the Aare Seeland Mobile Tramway
At Biel/Bienne there was just time to find a money machine before heading back to the station for our train to Basel. At train time there were three main line trains and five locals all arriving within five minutes. Our train was the first one that we have so far encountered to be late – it was held four minutes for a connection and the staff apologized.  However, we arrived at Basel on time.
At Basel, Bill and I decided to check out the Walderburgbahn. We took a quick commuter train to Liestal and found the tram which is across the platform from the SBB to Basel. It took some time to get to the tram platform because there were lots of mothers with strollers and small children with tricycles meeting fathers off the train from Basel. As a result we just missed a tram but there was only 15 minutes to wait for the next one. While we waited there was a continuous succession of freight trains, in both directions, running on the through lines. 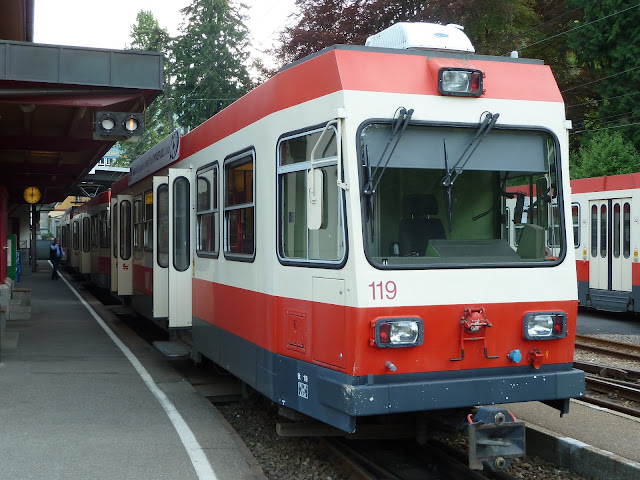 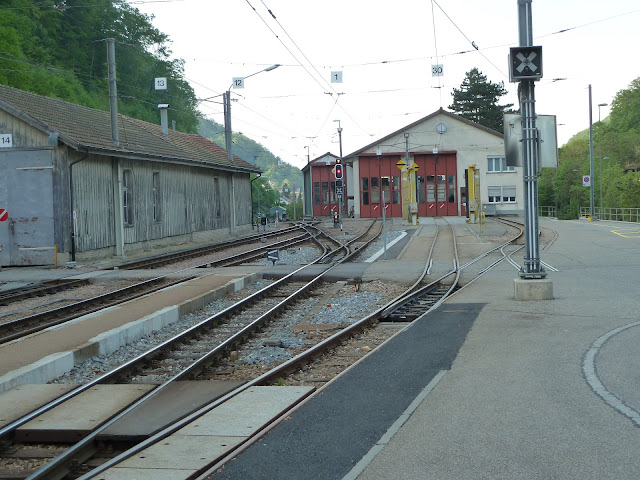 Waldenburg
The Walderbergerbahn is 750mm gauge, unique in Switzerland. The three car train was packed with commuters returning home from Basel. It was a great ride though pleasant country where we passed hop fields and watched a heron. The hillsides are well wooded. The small towns are a riot of colour, lilac in particular, and there is a variety of building styles all mixed together. The railway headquarters are at Waldenburg and the equipment is stored and maintained here. We even saw a 750mm double slip switch!
Bill and I caught the next train back to Oberdorf where we had a meal at a pizzeria close to the platform. Nobody spoke English but it was not too difficult to order penne/lasagna and beer. There were a few teenagers hanging around drinking coke but nobody else eating, apart from the owner and his family. There seem to be a number of recent immigrants in this area. 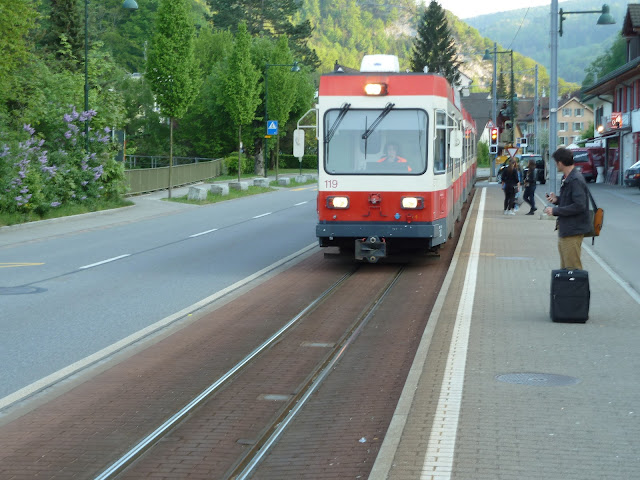 Click above to see pictures of the Waldenburgerbahn
The tram back to Liestal was less crowded. Liestal has a beautiful church with a wonderful spire with patterned tiles.
The connection to Basel was only two minutes, but we merely had to walk across the platform. It is so easy to get around in Switzerland!
Posted by Colin Churcher at 11:31 AM